This book describes the history of the development of the restriction enzymes and covers the major advances in the field over a period of more than 60 years. These bacterial endonucleases bind the DNA helix at specific base sequences and cut the DNA backbone. The bacteria that harbor such enzymes protect their own DNA against restriction via modification at the same recognition sites by their (usually adjacent) methyltransferase. A historical meeting at Cold Spring Harbor Laboratory in 2013 (see Appendix A: The History of Restriction Enzymes October 19–21, 2013 Program) brought together people from the origins of the field, as well as other scientists working on restriction enzymes, with this book as a result. The structure of the book in eight chapters is based on talks at this meeting, major reviews and research articles, and, in the first chapters, some useful older books listed in the References for further reading. Taken together, the book relates the history (from 1952 to early 2017) of this amazing, very large endonuclease family with four types (Types I, II, III, and IV).

The story starts in the early 1950s, an important period in the history of molecular science. The year of publication of the famous structure of the DNA double helix is 1953, but, less known, it is also the year of the first review that summarizes genetic experiments on “host-controlled variation.” These experiments with bacterial viruses (“phages”) in different bacterial strains were in fact providing evidence for the first Type I, III, and IV restriction enzyme systems and led to the slow but inevitable conclusion that the distinct picture of genotype and phenotype that had been built up with care during the first half of the twentieth century was breaking down (Chapter 1). During the 1960s, Werner Arber and coworkers showed host-controlled variation to be restriction and modification by methylation at the DNA level (Chapter 2). For this achievement, Arber was awarded the Nobel Prize in Physiology or Medicine in 1978, together with Hamilton O. Smith and Daniel Nathans, who discovered the Type II enzymes.

It should be noted that research into the phenomenon of restriction and modification relied heavily on major developments during the first half of the twentieth century, both technical progress (e.g., X-ray crystallography, ultracentrifuge, electron microscope, fractionation techniques) and in the field of microbial genetics (e.g., the discovery of both lytic and lysogenic bacterial viruses, conjugation, transduction, recombination, and use of isotopes for labeling). The integration of genetic studies with biochemical and physical analyses of the synthesis, struc­ture, and function of restriction enzymes led to an explosion of fundamental knowledge and details on their structure and function. Throughout the years improvements in these fields would go hand in hand with the progress in the restriction field, ranging, for example, from cloning vectors for use in bacteria, yeast, and other organisms (“shuttle vectors”) and improved bacterial hosts for the analysis of DNA from all kingdoms to agarose gels, DNA sequencing, Southern blots, polymerase chain reaction, increased computer power, atomic force microscopy, single-molecule studies, and, in recent years, whole-genome sequencing and methylome analysis.

The discovery in 1970 of Type II restriction enzymes (such as EcoRI; Chapter 3) that produced “sticky” DNA ends that could be resealed resulted in worldwide interest in these enzymes (Chapter 4). It soon led to reagents for recombinant DNA, mapping and isolation of genes, DNA sequencing, and analysis of repeat sequences in DNA. In addition, some scientists saw these enzymes as a marvelous opportunity to study DNA–protein interactions. A decade later the first DNA sequences of genes encoding restriction enzymes appeared while research into the biochemistry and genetics of these systems continued (Chapter 5). The studies in the following years indicated a great variety in mechanisms and structures of an increasingly large number of restriction enzymes and led to attempts to build evolutionary trees (Chapter 6). In 2003 a subdivision of the Type II enzymes into 11 subtypes was proposed, and a year later a book was published totally dedicated to restriction enzymes (Chapter 7). It illustrated the progress made with many Type II enzymes in different species and the crystal structures that led to the definition of a common catalytic cleavage core with the PD…(D/E)XK motif, although some enzymes have other (HNH, GIY-YIG, or PLD) structural domains. During these years research on the Type I and III enzymes was basically limited to a few enzymes in Escherichia coli. But all this changed with the advent of whole-genome sequencing and methylome analysis. These and other improved detection methods, together with single-molecule studies, are providing novel insights into the structures, functions, and applications of Type I, II, and III enzymes, but also those of the modification-dependent Type IV enzymes (Chapter 8). The discovery of many restriction systems in pathogenic bacteria is starting to shed light on the way these organisms evade host immunity and persist in the host with or without periodic disease outbreaks. Also, restriction-modification systems are useful for other medical purposes: for example, for typing strains of pathogenic bacteria such as “nontypeable Haemophilus influenzae (NTHi)” and for following changes in the gut microbiome upon changes in diet or disease treatment regimes. Last but not least, another highlight in the recent past has been the elucidation of the long-awaited structures of the first Type I and III enzyme complexes, which shows that the Type I, II, and III enzymes may have more in common than initially surmised.

Taken together, this book shows that the restriction enzymes are excellent tools to study the interactions of all sorts of proteins with DNA: How can we search the DNA for a DNA recognition sequence, whether a target site for nuclease activity, modification, or repair? How does the enzyme (complex) find that site via hopping, sliding, jumping, and/or looping? How do the enzymes bind and form a specific complex involving conformational changes in the protein and/or alterations in the DNA structure in order to position the catalytic domain in the right conformation to do its job, whether at that site or away from it? This latter process may involve more movement along the DNA and/or translocation in the case of enzymes with “molecular motor” subunits belonging to the SF2 superfamily. Many eukaryotic enzymes that are involved in, for example, DNA repair also belong to this family. 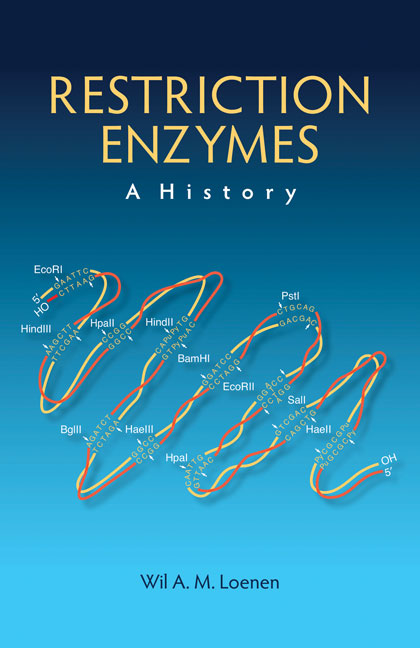